Dotsero is the only “active” volcano in Colorado, USA. It’s a short drive north of the Interstate 70 Dotsero exit, #133 in Western Colorado. The last eruption was over 4000 years ago but it’s considered active because the last eruption was less than ten thousand years ago. Even though it’s officially “active” it’s really “dormant” or “sleeping”. Looking into the crater, there’s no sign of volcanic activity. No lava, no steam. If the Internet didn’t tell me it’s a volcano, I would have never known.
I drove to the volcano headed west on I 70 from Exit 251 in Evergreen, Colorado. To get there:
Drive west and take exit 133 from I 70. At the end of the exit, turn north (right if headed west on I 70) then turn east (right), continue past the “No Outlet” sign. 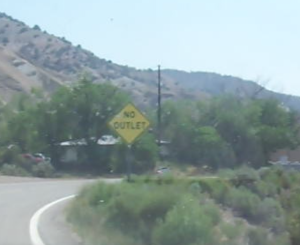 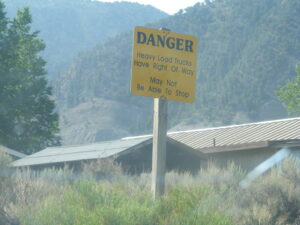 Follow the road for 1.4 miles from the trailer park to the crater.
Some Internet postings say the hike to the crater is three miles. It’s not. It’s only 1.4 miles each way from the bus stop if you decide to hike.
High clearance four-wheel drive vehicles are recommended. The road is pretty rough in spots, especially at the start of the road right after the Danger sign. I attempted to drive my truck in two-wheel drive mode and got stuck. After putting it into four-wheel drive mode, the road eased up a bit and I didn’t have any problem making it to the crater. The road is bumpy but a determined driver MAY be able to make it without a high clearance 4WD. If you’re looking at other internet postings, you’ll see some non-4WD drive vehicles were able to make it to the crater, others weren’t able to make it all the way.
My original plan was to drive part way up and hike the rest of the way but I was at the crater sooner than expected. When I arrived, it was quite hot and I was the only one at the crater. There is a trail going down into the crater that starts near the Castle Peak kiosk behind the fence.

I attempted to hike into the crater but abandoned my attempt because of the loose gravel and the steepness of the trail. I was concerned that if I made my way further down, I wouldn’t be able to get out. I did see the YouTube video where a guy slid down on his read end. I never did see the video of him getting out. Since he posted the video, I assumed he managed to make his way out of the crater. 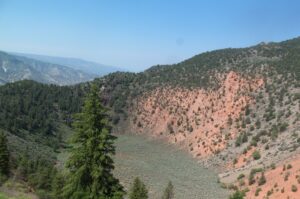 Instead of hiking into the crater, I hiked the road along the fence and beyond until the road ended. 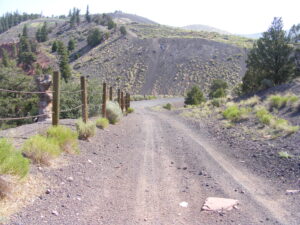 I didn’t measure it, maybe it was about a mile or less each way from the kiosk. 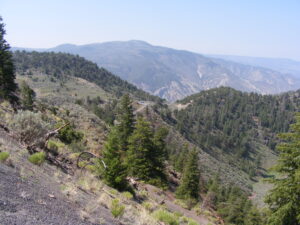 There are telephone poles along the road before and after the crater. I wouldn’t say Dotsero is wilderness.
As I drove back down to the trailer park, I did encounter another car on the way up. The other car stopped and we were able to pass each other. We were lucky – the road was not always wide enough for two cars. I didn’t notice the make of the vehicle, but it didn’t seem to be high clearance. Other than the other car, I was the only person on the volcano.
Overall, if you drive to the crater, it might not be a suitable hike for some people. There’s not much hiking near the crater. Going into the crater was too slippery and steep for me. I called BLM before going to Dotsero. They said because of the steepness, it could be dangerous for some people to hike into the crater. Other’s may find hiking into the crater less difficult. There isn’t a trail that goes all the way around the crater. If you want a hike, park at the bus stop and hike up to the crater from there. If you want to drive to the top, a decent 4WD should do the job without difficulty. I wouldn’t recommend driving a fragile 2WD sedan to the crater.
I went to Dotsero for the experience. Now I get to brag that I went to the top of Colorado’s only active volcano.